Andrew Price is NuWave's Director of Sales and Business Operations. With over 28 years of NonStop experience in development, product management, sales  marketing, he is now responsible for our NonStop Innovations Blog. We welcome your feedback! Please send your comments and questions to andrew.price@nuwavetech.com.

HPE NonStop and Hybrid IT: The Best of Both Worlds

Hybrid IT Infrastructure has been a core part of HPE’s strategy for a number of years now, and it’s easy to see why. Across their product portfolio, they have made a massive investment in public and private cloud infrastructure, developing dedicated hardware and partnering with Microsoft Azure and others. But what does Hybrid IT mean for the average NonStop installation?

As HPE NonStop users, we know that our platform and applications typically house the most important parts of our enterprise – the ATM system that must not deny transactions unnecessarily, the manufacturing production line that must produce thousands (or millions) of items an hour without fail, or the retail point of sale system that must always be available to our customers. How does that mission critical functionality link in with the cloud?

The first point to note is that there are several different types, and providers, of cloud infrastructure. Private clouds are typically hosted internally, so would generally be in the main data center, along with the HPE NonStop Server and other critical IT infrastructure. A Virtual Private Cloud might be hosted elsewhere, but still be in the same internal network as the NonStop. Public clouds are typically hosted on shared infrastructure, and are often provided by organizations that have become household names – IBM, Google, Microsoft, Amazon and others. Hybrid IT is simply an environment that combines elements of private and public infrastructure, allowing you to get the best of both worlds. Sensitive or proprietary data, and critical applications can be safely and securely maintained within the corporate firewall, and cloud services can be used for more compute-heavy or less sensitive operations. Using cloud services for some parts of your application also allows you to better deal with variations in workload, where the cloud services may handle higher-than-normal processing peaks.

So, an HPE NonStop server and a cloud-based solution working together is a textbook application of Hybrid IT.

But why would we want to do that? Lots of reasons, actually. The data and applications that are typically hosted on HPE NonStop are generally fairly valuable, and allowing (carefully controlled) access to those services and data can bring significant business value. Alternatively, perhaps the NonStop application would benefit from access to a service that is available on an in-house or external cloud. In-house services may be placed on a private cloud for various reasons, including performance, on-demand scalability or to act as a gateway to other external data and services. Commonly used external services include currency conversion, mapping and address services, and many many others. www.programmableweb.com currently lists over 18,000 services available as APIs on the web. Additionally, many organizations are moving to services-based architectures, making services centrally available via an internal API hub.

A quick word on how services are typically constructed. In the early-mid 2000s, the concept of Service Oriented Architecture (SOA) became popular, where most services were typically described using Simple Object Access Protocol (SOAP). SOAP has some great benefits – foremost among them being that it is a standard, and has become widely used and understood. However, despite its name, it is not simple; it can be difficult to implement and being quite verbose, can hamper performance. Enter REpresentational State Transfer (REST). REST uses HTTP as its transport, and takes advantage of the built-in features and methods of the HTTP protocol. It also typically uses JavaScript Object Notation (JSON) for its payloads. JSON is considerably less verbose than SOAP. These features allow REST-based services to be more lightweight than their SOAP counterparts, and when combined with the fact that REST/JSON is widely supported, this means that REST is the architecture of choice for most new services being developed today.

So, if we agree that the concept of Hybrid IT has value to HPE NonStop users, and that REST is the best way to integrate with other services, how do we implement a solution?

A good option is to use a third party middleware solution to service-enable parts of your application. LightWave from NuWave Technologies is one such product suite – it can provide server capabilities, which allows users to create Web services from existing applications, and client capabilities, allowing NonStop applications to integrate with external web services. 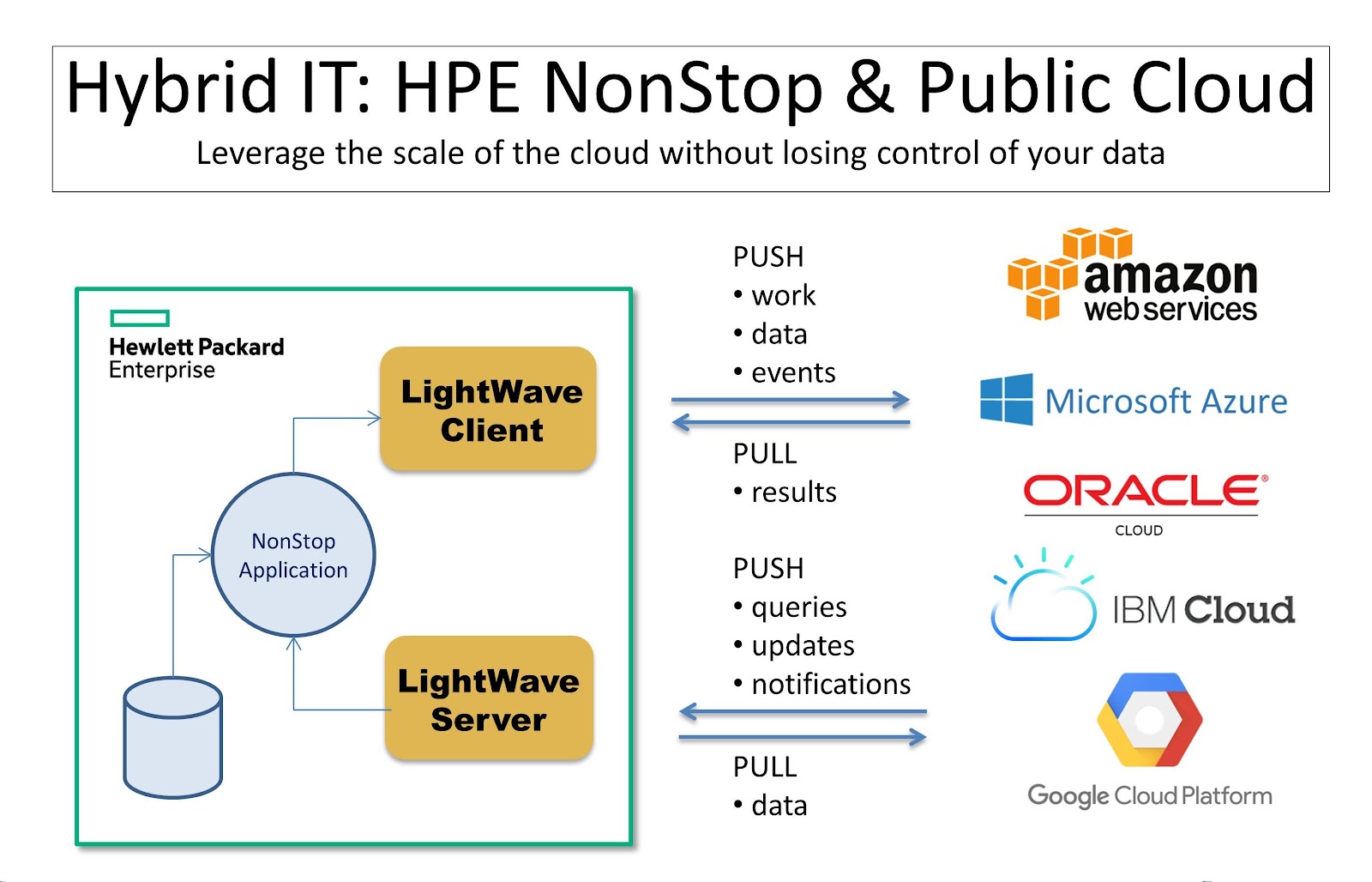 This high-level architecture diagram gives a quick snapshot of the wide range of ways that HPE NonStop applications can be easily integrated with cloud services. Because REST takes full advantage of HTTP, clients can both send and receive data, depending on the application’s design and requirements.

REST client functionality can be used to:

REST server functionality can be used to:

LightWave products also include tools to ensure that implementation is quick and easy. The products support a number of standard API definitions, including Swagger (aka OpenAPI) and JSON samples. Most customers are up and running with LightWave software in a matter of hours.

This approach allows you to keep your existing, and valuable, NonStop applications and data, while facilitating a simple move to Hybrid IT to leverage cloud-based services where it makes sense to. Your applications keep performing their core processing without change, but can now be accessed more easily by other parts of the enterprise, and can utilize the massive variety of cloud features to build out business capabilities.